James Hicks, a former employee of WMU-Cooley Law School, has joined the faculty once again as a visiting professor. He joins WMU-Cooley from Barry University School of Law in Orlando, Florida, where he served as assistant dean of academic success and bar preparation. 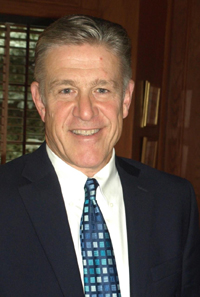 Hicks previously served WMU-Cooley’s Lansing campus for 23 years, first as general counsel from 1991 to 2002, then as a full-time professor from 2002 to 2014. He was named a distinguished professor emeritus by the law school’s board of directors in October 2014. Hicks received numerous honors while serving WMU-Cooley, including a three-time recipient of the Student Bar Association Award for Outstanding Education Program; Quod Libet Society Award as Outstanding Professor for Excellence in Teaching; and being an inaugural recipient of the Pillar of Strength Award by the African Legal Scholars Association, Black Law Students Association and Caribbean Law Students Association.

After leaving WMU-Cooley, Hicks joined the faculty at Savannah Law School in Savannah, Georgia, where he served in numerous capacities throughout the next five years, including associate dean, assistant dean of assessment and practice readiness, and assistant dean of academic achievement.

"I am excited to be back at WMU-Cooley and serve the Tampa Bay campus as a visiting professor,” Hicks said. “It is a great honor to be invited back to teach future lawyers at this top-notch law school.”

Hicks earned his Bachelor of Arts degree from Williams College in Williamstown, Massachusetts, and a juris doctor from Washington and Lee University School of Law in Lexington, Virginia.

“We are thrilled to welcome back our esteemed colleague, Jim Hicks, as part of our visiting faculty at WMU-Cooley,” said Associate Dean and Professor Daniel Matthews said. “His expertise in the legal profession, combined with his previous background and extensive knowledge of WMU-Cooley, will be a valuable asset for our Tampa Bay students.”