Attorney Wolfgang Mueller, of Novi, Michigan, said he “cannot think of a more noble calling” after donating to WMU-Cooley Law School’s Innocence Project. The founder of the Mueller Law Firm donated $8,500 to the project to support their work. The project strives to earn the release of factually innocent prisoners who have been wrongfully convicted. 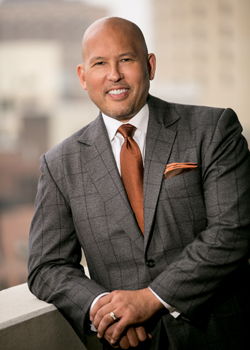 “I am proud to support the WMU-Cooley Innocence Project in their efforts to correct wrongful convictions,” said Mueller. “Their diligence and perseverance has allowed individuals to avoid dying in prison for crimes they did not commit.”

Mueller, who specializes in wrongful conviction and police misconduct cases, has been a speaker at seminars for the American Association for Justice and the Michigan Association for Justice (MAJ). He is a past member of the MAJ’s executive board and is a member of the Council for the State Bar of Michigan’s Negligence Section. Mueller often speaks at law schools on the issue of police misconduct.

“We are thankful for Mr. Mueller’s dedication to the Innocence Project’s work,” said Tracey Brame, director, WMU-Cooley Innocence Project. “His donation will provide additional support for our review of cases and provide much needed resources to those applicants who we accept as clients.”