The annual West Michigan Community Day of Remembrance and Scout Salute in Grand Rapids, Michigan, honored those who died during the terrorist attacks on September 11, 2001. During the commemoration of the 20th anniversary of the attacks, WMU-Cooley Law School Constitutional Law Professor and retired Brigadier General, Michael C.H. McDaniel spoke.

McDaniel, who served in the Pentagon as deputy assistant secretary for homeland defense, was joined by Michigan Lieutenant Governor Garlin Gilchrist, who also gave remarks. Tracey Brame, WMU-Cooley associate dean and director of the law school’s Innocence Project, also participated in the ceremony.

The event, which has been held annually since 2002, took place at the Gerald R. Ford Presidential Museum.

McDaniel, himself an Eagle Scout, spoke about unity and hope and the positives that came because of the terrorist events. He shared about the heroism involved when the 33 passengers of United Flight 93 voted whether to rush the terrorist and try to retake the plane.

“Nothing is more American than their instinctive need to act, to defend others,” said McDaniel. “Nothing is more important except their instinctive need to vote. They needed consensus, buy-in, agreement. They were seeking unity of purpose. Voting, is the process, the action, as a community, the 33 passengers on United 93, or as communities voting for local city council or for President, for raising our property taxes, to ballot initiatives on policy issues to seek consensus. To listen to our neighbors. We seek consensus. We vote.”

While speaking directly to the Scouts in the audience, McDaniel said that when he was a young Scout, one of the lessons he remembers the clearest, was learned at an Order of the Arrow retreat.

“It was called 10-2,” said McDaniel. “For it was ten words, each two letters long. Ten of the smallest words possible, but banded together have the strongest impact possible. ‘If it is to be, it is up to me.’”

Brame participated in the events as a Scout leader with members of Scout Troop 258. Brame and her husband Kenyatta resurrected his childhood Boy Scout pack and troop so they could share the Scouting experience not only with their son, but young people across the inner city of Grand Rapids.

“We have developed what I hope has been a safe haven for a special group of young men (and now young women, including my daughter) to learn, grow and build character,” said Brame. “The mentorship provided by our Scout leaders, two of whom are Eagle Scouts, has been invaluable. Diversity within the Scouting program is essential, as it provides access and opportunity to some of the kids who need it the most.” 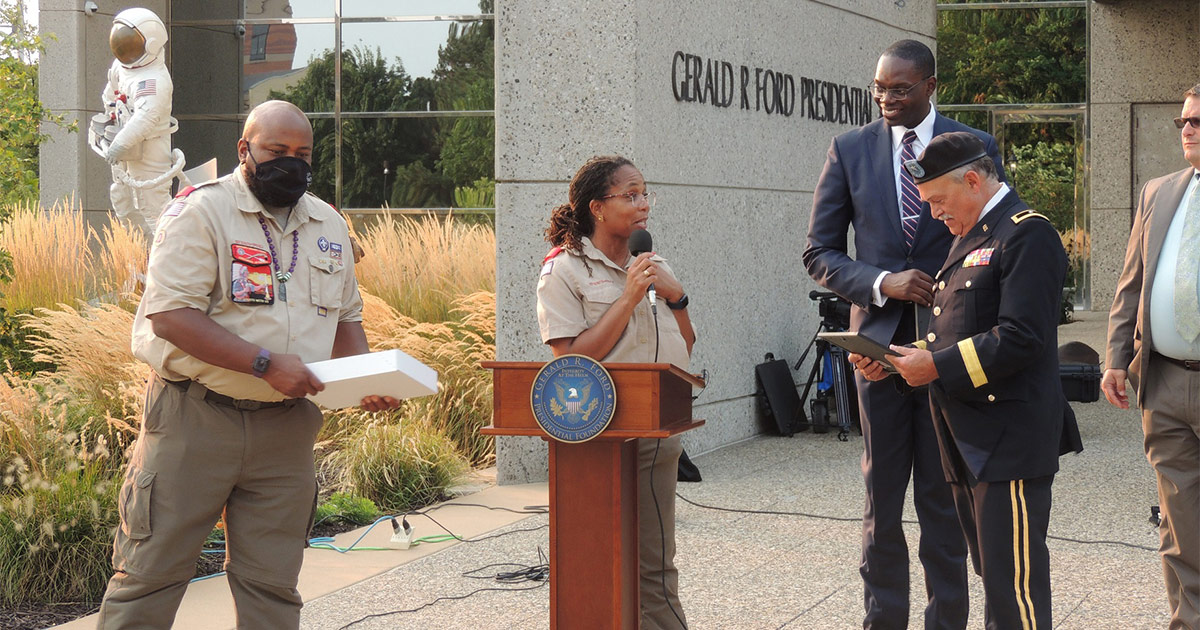