The 18th annual West Michigan Community Day of Remembrance and Scout Salute, which pays honors to those who died during the terrorist attacks on September 11, 2001, included WMU-Cooley Law School Associate Deans Michael C.H. McDaniel and Tracey Brame as featured presenters. 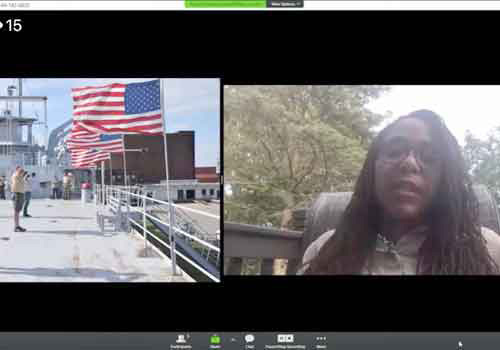 The event, which this year was held virtually due to COVID-19, was presented by the President Ford Field Service Council and Boy Scouts of America – with support from the Gerald R. Ford Presidential Museum and the Gerald R. Ford Presidential Foundation. McDaniel and Brame were asked to present because of their ties to both the Boy Scouts of America and to the terrorist events of September 11, 2001.

McDaniel, himself an Eagle Scout and retired brigadier general and former deputy assistance secretary for Homeland Security, provided remarks during the lunch hour.

“Today is a day of remembrance. It is not a day of division, a day of hate, nor even a day of pomp and pageantry,” said McDaniel. “It is a day to pause and remember, not the awful events of that day, but the service and sacrifice of the law enforcement, fire, EMS and military personnel. To take firm resolve from those who gave their last full measure of devotion to our country.”

Speaking about similarities between the attack on Pearl Harbor 75 years ago, and the terrorist attacks of Sept. 11, 2001, McDaniel said many individuals refer to  Sept. 11 as our generation’s Pearl Harbor with a key difference - the attack on Sept. 11 was against ordinary citizens.

“But,” McDaniel said, “I strenuously disagree with the phrase, ‘ordinary citizens.’ That phrase only has meaning if the writer is referring to ‘civilians’ and comparing them to military or other forms of government. For there is nothing ordinary about being a citizen. On this date, United Airlines Flight 93 was headed from Newark, New Jersey, to San Francisco on Sept. 11, 2001, when it was diverted by hijackers in an apparent effort to direct it to Washington D.C. Several passengers and flight attendants learned from phone calls that suicide attacks had already been made by hijacked airliners on the World Trade Center and the Pentagon. Many of the passengers then attempted to retake the plane from the hijackers. Because of their actions, the hijackers were forced to crash near Shanksville, Pennsylvania, as people aboard the plane tried to wrest control of the cockpit. All 33 passengers and seven crew members died.”

While speaking directly to those serving as Boy Scouts today, McDaniel said, “Today, you are not just honoring our flag, you are honoring the firefighters, police officers, and members of the military for their service and sacrifice. You, Scouts, you are not just the potential police, firefighters, emergency workers, soldiers and school teachers of tomorrow. You are the dedicated and informed public servants that this country will always need, because public service in all its forms is the foundation of this great country.”

Along with her husband, Kenyatta, Brame is credited with starting an inner-city Boy Scout troop in Grand Rapids, Michigan. She was working in Washington D.C. during the September 11 terrorist attacks.

During her remarks, Brame spoke about the importance of September 11 and how the scars from the terrorist attacks brought individuals from all backgrounds together.

“Those loved ones left behind, who keep the memories of those who passed alive, are the best of America. Those who continue to suffer with scars – physical and psychological – but who persevere nevertheless, are the best of America,” said Brame. “Do not be distracted by the divisions of the day. People of all backgrounds, from a grand diversity of states, have made this union work for 250 years. There is no way that we are going to stop now. We are, at the end of the day, all day, the United States of America.”