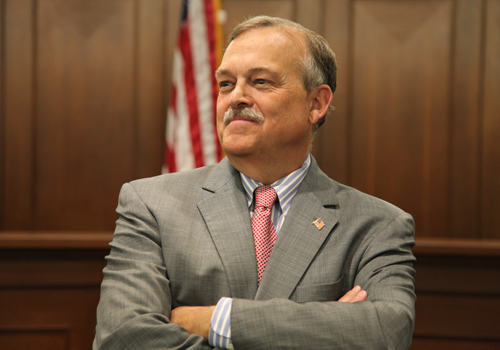 "General, Dean, and Professor McDaniel excels at all of his titles. As a former enlisted man myself, I wondered what it would be like working with a general,” said WMU-Cooley President and Dean James McGrath. “If they are all like Associate Dean Michael C.H. McDaniel, and I am sure they are not, then they are incredibly student centered.”

The award recognizes Michigan legal leaders over the age of 60, or who have practiced for 30 years or more, for their successful careers and valuable contributions to the community. McDaniel and his 18 fellow hall of fame recipients will be honored during the Michigan Lawyers Weekly’s second annual Hall of Fame Luncheon and Awards Ceremony at the Detroit Marriott Troy on Oct. 9. The honorees will also be profiled in a special section in the Oct. 12 issue of Michigan Lawyers Weekly.

“I am quite honored to be selected as a recipient for Michigan Lawyers Weekly’s Hall of Fame Class of 2020, and to represent WMU-Cooley in such an admirable role,” McDaniel said. “It is a privilege to be named among this prestigious group of revered legal professionals in Michigan.”

A national security expert, McDaniel joined WMU-Cooley’s full-time faculty as a professor in the Constitutional Law Department in 2010. Previously, he served at the Pentagon as deputy assistant secretary for Homeland Defense Strategy, Prevention and Mission Assurance, where he supervised the Department of Defense Critical Infrastructure Protection Program and Global Anti-Terrorism/Force Protection Policy. He also served as former Michigan Gov. Jennifer Granholm’s homeland security adviser for six years, while serving as the assistant adjutant general for Homeland Security, Michigan National Guard. A member of the Michigan National Guard for over 26 years, McDaniel was also a military judge and assistant attorney general for litigation in the executive division of the Michigan Department of Attorney General.

“I can always count on General McDaniel to share policy decisions from a perspective that puts our students first,” said McGrath. “He always gives me candid counsel, and his advice reflects his deep love of our country, our state, and our school. He is a terrific colleague."