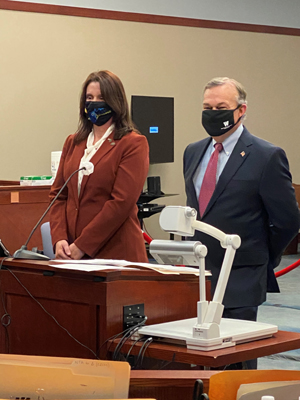 Quesenberry attended WMU-Cooley while serving as the Company Commander for her Reserve Unit in Virginia and is currently serving as the Executive Officer (XO) for the Army Reserve 3rd Battalion, 95th Regiment (Signal) located in New Mexico.

“Because my Army family is a significant part of my life, it was extremely important to me to have other veterans as a part of my ceremony.  These individuals recognize the sacrifices that come with serving, understand the significance of true grit and provided me examples to live up to.” stated Quesenberry. “I am extremely proud to be a member of the Michigan Bar. My ability to continue forward and reach this milestone was due to the support I had from each and every person in my life - mentors, friends and family.”

While attending law school, Quesenberry faced a myriad of obstacles due to service-connected injuries, including overcoming the stigma of having a Traumatic Brain Injury (TBI). Quesenberry credits her law school and military experience for teaching her the tenacity and resilience to persevere.  During her attendance at WMU-Cooley Quesenberry learned to overcome the stigma of having a TBI in order to build her confidence to excel in law school and ultimately pass the bar exam.

“Attending WMU-Cooley was a remarkable experience as it helped me to fully accept and understand my disability so that I could succeed,” said Quesenberry.

While deployed as the 335th Signal University Commandant and Command’s Special Victim Advocate in the Middle East, Quesenberry first took the Michigan Bar Exam while on leave in July 2015 and missed passing by two points.  After returning from her deployment, she suffered from another service-connected TBI due to a Military Sexual Trauma. She refused to let this dissuade her from her goal of passing and continued to take the bar exam between her work schedule and deployments, ultimately succeeding in July 2020.

“Placing Carmen’s name for admission to the bar was a special honor for me,” said McDaniel. “The best part of my job as a professor and associate dean is being afforded the opportunity to motion the court for the admission of our students to the Michigan State Bar, especially those who have served our country.”