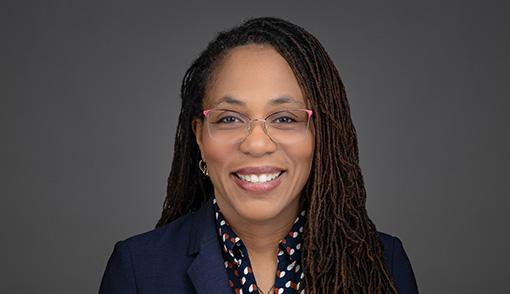 ASSOCIATE DEAN OF EXPERIENTIAL LEARNING AND PRACTICE PREPARATION, AND PROFESSOR

"As an African-American woman, I chose law as a profession because I believe it to be, at its best, a great equalizer that nudges us toward our better selves. It has always been my mission to be a resource as well as a mentor to my community, and help to hold our country to its highest ideals."

I serve as the Associate Dean of Experiential and Practice Preparation and the Director of the WMU-Cooley Innocence Project, and am also the Immediate Past President of the Grand Rapids Bar Association.

I came to WMU-Cooley Law School in February 2006 from Legal Aid of Western Michigan, where I was a staff attorney. I advised and represented low-income clients on family-law, housing, and consumer-law issues. I also collaborated with other programs to address legal issues faced by ex-offenders re-entering the community. In addition, I translated for Spanish-speaking clients.

Previously, I served as a staff attorney for the Public Defender Services for the District of Columbia, was a research and writing specialist with the Federal Defender Office, and was an Assistant Defender with the State Appellate Defender Office in Detroit. I began my legal career as a law clerk to the Hon. Julian Abele Cook, Jr. in the U.S. District Court in the Eastern District of Michigan.

Early in my career, my passion for justice led me to an internship with the Alabama Capital Resource Center. In this role, I garnered death-penalty litigation experience. I conducted extensive legal research; interviewed inmates, relatives, and former jurors; compiled statistics on racial composition of juries; helped prepare an argument for the U.S. Supreme Court; and drafted racial-justice legislation for the state of Alabama.

I later brought that interest in justice to WMU-Cooley, where I started the Access to Justice Clinic at the Grand Rapids campus in 2006. I have overseen both this clinic and the West Michigan Public Defender Clinic. In addition to these roles and my work as an Associate Dean, I have also taught elective constitutional law courses. Prior to joining the law school, I also served as an adjunct professor at Grand Rapids Community College.

I have volunteered with young people also, discussing the law with middle-school, high-school, and college students. I have worked with the 3R’s Program, where lawyers volunteer each month at UPrep High School, teaching ninth graders about the Constitution. I also helped prepare the students for an end-of-year mock debate hosted at the Grand Rapids WMU-Cooley campus.