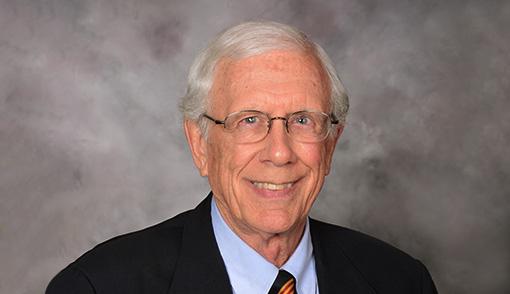 Professor Stockmeyer joined the WMU-Cooley faculty in 1977 following 12 years as a commissioner and director of research for the Michigan Court of Appeals. He has also taught as a visiting professor at California Western School of Law and Mercer University Law School, and in the "Down Under" Foreign Study Program.

Professor Stockmeyer is an award-winning teacher, prolific author, and active member of the organized bar. A three-time recipient of the Stanley E. Beattie Teaching Award, Professor Stockmeyer was named national Outstanding Professor in 1985 by Delta Theta Phi Law Fraternity. He has also received the Socrates Award from the Hellenic Bar Association and the Student Bar Association's first Barrister Award.

Professor Stockmeyer is the editor and co-author of the book Michigan Law of Damages (1989) and is the author of articles in a wide variety of professional journals and newsletters. He is a past president of Scribes — the American Society of Legal Writers. In 2009, he was named to the ABA Communication Skills Committee. His recent publications are archived at http://ssrn.com/author=80303.

An article he wrote for the WMU-Cooley Law Review was selected for reprinting in an anthology of exemplary legal writing. Another article received the Michigan Academy of Science, Arts and Letters’ Cohn Prize for Law and Public Policy Scholarship.

Professor Stockmeyer is a former member of the Executive Committee of Michigan's Institute of Continuing Legal Education, and has made numerous CLE presentations. He has also lectured for the Michigan Judicial Institute, the educational arm of the Michigan Supreme Court.

The Lansing State Journal recognized Professor Stockmeyer in 1988 as one of mid-Michigan's "88 Greats" for his service to the community and the legal profession. He was profiled in Michigan Lawyers Weekly as one of Michigan's "Leaders in the Law" in 2005.