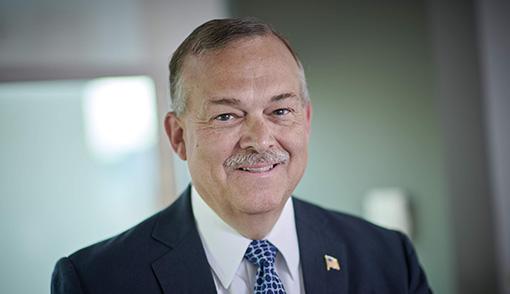 Director of Homeland Law/LL.M., and Professor

I joined the WMU-Cooley Law School full-time faculty as a professor in the Constitutional Law Department in 2010 and developed an LL.M. program in Homeland and National Security Law.

Before joining WMU-Cooley, I most recently served as the Deputy Assistant Secretary for Homeland Defense Strategy, Prevention and Mission Assurance. My responsibilities included supervision of the Department of Defense Critical Infrastructure Protection Program and Global Anti-Terrorism/Force Protection Policy.

I was appointed by Michigan Gov. Jennifer Granholm as her Homeland Security Adviser in 2003 and served in that capacity until July 2009. At the same time, I also served as the Assistant Adjutant General for Homeland Security, Michigan National Guard. My duties included acting as the liaison between the governor's office in Michigan and all federal, state and local agencies on homeland security with responsibility for developing statewide policy on homeland security preparedness and coordinating efforts to protect the state and its critical infrastructure from terrorist attacks.

I served as a member of the National Governors Association’s Homeland Security Advisors Council where I was elected to the executive committee in 2006 and 2008. I was named by the Office of Infrastructure Protection, Department of Homeland Security, as Chair of the State, Local, Tribal, and Territorial Government Coordinating Council in 2007.

I received the Zimbardo Award, given to the Center for Homeland Defense and Security graduate who best embodies high academic achievement, outstanding leadership, and innovation in homeland security thinking. Other awards include the State Bar of Michigan Champion of Justice (2017) and the Michigan Lawyers Weekly Hall of Fame (2020).

Book and Chapters in Books