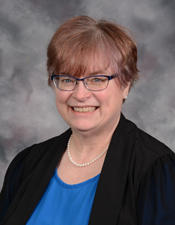 "I strive to produce lawyers who help the law work for ordinary people from all walks of life.  In a democracy, that is of vital importance."

Professor O'Leary practiced law in Indiana before becoming a law professor in 1988. Her legal practice included working as an associate in a small law firm in rural southern Indiana, where she litigated constitutional and employment discrimination cases and served a general practice clientele.

She also worked as a legal services attorney with the Legal Services Organization of Indiana. Professor O'Leary joined the faculty of Indiana University at Indianapolis in 1988, supervising students in the Civil Practice Clinic.

In 1993, she became the Clinic Director at the University of Dayton School of Law, a position she held until 2000. Professor O'Leary joined the faculty at WMU-Cooley Law School in 2000 to teach in the Sixty Plus, Inc., Elderlaw Clinic, and taught in it for 17 years, 10 years as Executive Director. She now teaches Contracts, Property, Multicultural Lawyering, and Equity & Remedies. She served as an on-site director for WMU-Cooley's "down under" Study Abroad program for several years.

Professor O'Leary has served as the chair of the Association of American Law Schools Section on Clinical Legal Education (1999), on the executive committees of that section and the Poverty Law Section of the AALS, as the newsletter editor of the AALS Section on Clinical Education, on the Board of Editors of the Clinical Law Review and has served as Vice President of the Legal Aid Society of Dayton Board of Directors.

Professor O'Leary has written in the field of multicultural lawyering, first-year law teaching, teaching online, elder law, attorney-client counseling, housing law, and clinical teaching. She has presented papers at the UCLA/University of London International Clinical Scholarship Conference and the New York Clinical Theory Workshop, and has presented research in New Zealand and Australia. She was the co-organizer of the conference, Teaching Multicultural Lawyering held at WMU-Cooley Law School in March, 2021.