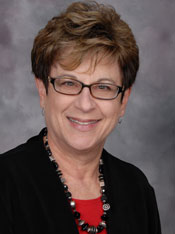 Before attending WMU-Cooley as a student, Professor Frank spent 18 years as an educator. Following graduation from WMU-Cooley, she practiced in the litigation section of Dickinson, Wright, Moon, Van Dusen and Freeman then returned to WMU-Cooley as a faculty member. Professor Frank was involved extensively in public service activities. She  authored two editions of the Senior Citizens Resource Handbook, an official publication of the State Bar of Michigan, three law journal articles, and two law review articles. She participated as a member of the American delegation to the International Client Counseling Competition and served as a liaison to southern Africa. She was a 1999 recipient of the Diana Award.

As a professor, she supervised student interns at the Sixty Plus, Inc., Elderlaw Clinic, and conducted classes as part of the clinic's curriculum. She taught Contracts and Wills, Estates and Trusts.