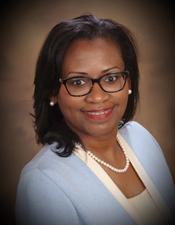 After graduating with honors from Yale College and Yale Law School in 1981 and 1984, respectively, Professor Neville-Ewell started her career as a law clerk for the Honorable Julian A. Cook, Jr., a United States District Court Judge for the Eastern District of Michigan. Since then, she has worked in the public and private sectors and academia. A native Chicagoan, she returned to Chicago after the clerkship to work as an associate at Sidley and Austin. After marrying the Honorable Edward Ewell, Jr., she returned to Michigan to work as an associate at Honigman Miller and later joined the faculty at Wayne State Law School. Prior to joining the faculty at Western Michigan University Cooley Law School, she worked as General Counsel for the Detroit Housing Commission and Chief of Contracts for the City of Detroit.

As an academic, Professor Neville-Ewell has taught Contracts, Ethics, Property and Real Estate Finance and published articles and compilations for academics and the public. As an academic, her most recent articles include:  “A Slice of History Underlying the Current Financial Pandemic: Black Women and Property 1800-1850: Black Women as Property and Statutory Redemption Rights Revisited: 21st Century Factors for the Legislature to Consider” (awaiting publication). Recently, she coordinated a national housing symposium, through the 10CORE® Law Society reflected below, entitled “HUD's Past, Present and Future” (including a commemoration of the 50th Anniversary of Detroit's 12th Street riot and rebellion). Given her presentation at the event, Professor Neville-Ewell is finishing her next article entitled “HUD's Next Steps: A Plan to Change the Course of Homeownership through ‘Housing’ Literacy.”

Throughout her career, Neville-Ewell has also published articles about real estate issues for the public. Once a writer for the former Charter One Bank, the bank published her “advice” columns and articles monthly in the Michigan Chronicle, a local Detroit newspaper.  In conjunction with being the founder of the Ten Commandments of Real Estate Law Society (10CORE® Law Society), a 501(c)(3) organization dedicated to educating the public through outreach, she remains dedicated to providing substantive town hall meetings for the public with passionate law students and volunteer lawyers. The 10CORE® Law Society has provided outreach in Michigan, Florida, Georgia and Maryland. It is in the process of expanding nationally to bridge the gap between the public and providing “access to justice through legal literacy.”

In addition to scholarly publications, as part of her "freedom, literacy and organization" series, Professor Neville-Ewell also  recently released Organize and Understand Your Real Estate Documents with the FLO-FOLDER®, a hybrid book and tool kit designed to educate youth and adults about the real estate process and essential documents.

Also a frequent speaker on housing related topics, the Justice Department invited Professor Neville-Ewell to be a panelist at a Mortgage Fraud Summit hosted by President Obama’s Financial Fraud Enforcement Task Force. In addition, she frequently speaks on talk shows about mortgage and real estate issues, has provided weekly “hot tips” about mortgage and foreclosure issues on a radio program, and has spoken at events sponsored by AARP, the American Bar Association, the Detroit Area Agency on Aging, the Detroit Branch of the Federal Reserve Bank, the Michigan Attorney General’s Office, NAACP, and National Bar Association, among other organizations.

Throughout her career, Professor Neville-Ewell has been passionate about and received awards and acknowledgments for pro bono service. Notably, former Governor Granholm appointed her to the Michigan State Housing Development Authority (MSHDA) Board where she ultimately became its first African American female Chairperson. MSHDA is responsible for facilitating the State of Michigan’s affordable housing development and homeownership initiatives. Also, the Eastern District of Michigan Federal Bar Association honored her with the “Wade H. McCree, Jr. Award for the Advancement of Social Justice,” heralded as "one of the most prestigious awards" provided to people in recognition of their "contributions to the community." Past recipients include, among others, the Honorable Damon J. Keith, Honorable Dennis W. Archer, George W. Romney and William G. Milliken. She remains passionate about working with organizations dedicated to enhancing and building sustainable communities.