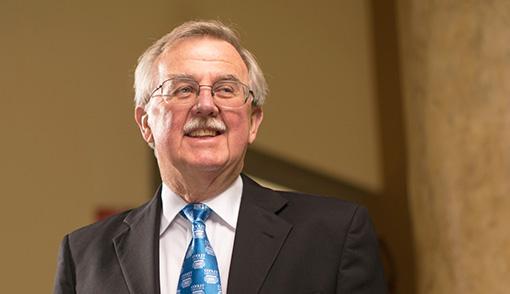 I joined WMU-Cooley Law School in 1975 as a professor of law. I served as Dean from 1982 to 1987 and then again from 1996 to 2018. I was named president of the law school in 2002 and served in both capacities from then until August 31, 2018 when I retired from those offices. He remains with the school as a tenured professor and Dean Emeritus.

Before joining WMU-Cooley, I served as administrator for the Office of Criminal Justice Programs for the Michigan Department of Management and Budget from 1972-1975, having previously served there as Deputy Administrator in 1971 and as Director for Program Planning during 1970 and 1971. In 1969 and 1970, I served in the Executive Office of Governor William G. Milliken as the Law Studies Coordinator for the Michigan Commission on Law Enforcement and Criminal Justice.

While working in the governor’s office and the Department of Management and Budget, I was a member of the National Conference of State Criminal Justice Planning Agencies, where I served as Chair of the Ad Hoc Committee on Appropriations and as a member of the Fund Flow Study Group, the Grant Management Information Systems Committee, and the Legislative Committee.

From 1967 to 1969, I served as a Special Attorney in the Criminal Division of the United States Department of Justice. As a member of the Organized Crime and Racketeering Section, I was assigned to the Detroit Organized Crime Strike Force in 1968 and 1969, which was the first full-time deployment made by the Justice Department.

From 1979 to 1983, I was a member of the Michigan Commission on Criminal Justice, serving as chair of the Executive Committee, the Improved Justice Process Committee, and the Governor's Committee on Governmental Immunity. I also served on the Incarceration and Alternatives Committee.

My text, Michigan Administrative Law, is published annually by the West Group. I am also a member of Scribes, the American Society of Writers on Legal Subjects.

I was honored by the Legal Writing Institute with the Golden Pen Award and by the Grand Rapids Bar Association with the President's Award. I also received awards from the Michigan Capitol Chapter of the American Society of Public Administration for Public Service in Academia and from the Michigan Business Monthly for support of entrepreneurialism.