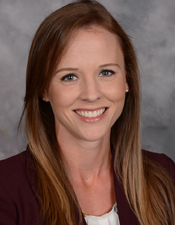 Before joining WMU-Cooley, Professor Wolf was an associate attorney and law clerk for Tew & Associates in New Port Richey, Florida.

While earning her J.D., Professor Wolf interned for then State Bar of Michigan President Julie I. Fershtman. She did her externship with the Hon. David Lawson, United States District Court, Eastern District of Michigan.

She is a member of the Florida Bar, the Hillsborough County Bar Association, and the Ferguson-White American Inn of Court, and she has volunteered with the Bay Area Legal Services Domestic Violence Assistance Program. She also participated in the school’s Service to Soldiers program. Before law school, she volunteered with post-Hurricane Katrina clean-up in New Orleans.