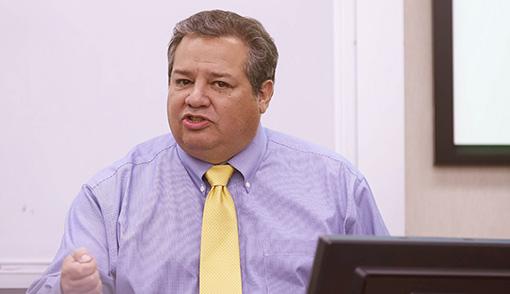 I joined the full-time faculty in 2005 at Western Michigan University Cooley Law School after serving as an adjunct professor beginning in 1998.

I’ve been a part of the Ingham County legal community since January 1994, when I joined the Ingham County Prosecutor’s Office. During my time with the office, I served as an assistant prosecuting attorney in the district and circuit courts, and with the Tri-County Metro Conspiracy Task Force. After that, I served as a Unit Chief for Child Sexual and Physical Abuse, and District Court sections of the Prosecutor’s Office.

Previously, I began my career in 1992 as an assistant prosecuting attorney in district, circuit and family courts for the Mecosta County Prosecutor’s Office.

I have authored works on prosecutorial ethics. I have also trained at the Mid-Michigan Police Academy and have lectured across the state for the Governor’s Task Force for Neglect and Abuse Training. I’m also a criminal defense trial consultant.

I teach Criminal Law and Evidence.