The Auburn Hills campus of WMU-Cooley Law School will celebrate MLK Day on Monday, Jan. 20. The event will begin with a brunch at 10 a.m. A presentation, "Assessing the Dream: A Progress Report," will be held at 10:30 a.m. featuring Aaron Burrell, Michael Lamb, and Latoya Palmer. The event is free and open to the public. The campus is located at 2630 Featherstone Road, Auburn Hills, Michigan, and the events will be held in Room 145.

Integrity in Our Communities Speaker Series

WMU-Cooley alumna Syeda Davidson will be the featured speaker at "Be Well to Do Well," a presentation on Tuesday, Nov. 12 at noon at the WMU-Cooley Law School Auburn Hills campus. Syeda, an attorney at Burgess Sharp & Golden, PLLC, focuses her practice on representing individuals in employment and other civil rights matters. This Integrity in Our Communities presentation will be held in Room 145 of the campus at 2630 Featherstone Road, Auburn Hills, Michigan. The event is free and open to the public. Please RSVP to [email protected].

The WMU-Cooley Lansing campus will hold the city of Lansing's Veterans Day celebration Monday Nov.. 11 at the school's Cooley Center, 300 S. Capitol Ave., in downtown Lansing. Breakfast will be served at 830 a.m. and the program will be held at 10 a.m. in the first floor lobby of the building. The event is free and open to the public. The event will include appearance by Lansing Mayor Andy Schor, WLNS anchor Sheri Jones, and the Glen Erin Pipe Band. Associate Dean and Brig. Gen. C.H. Michael McDaniel will provide the keynote address.

Sign up for the Kimble Center for Legal Drafting's first public seminar. Because of a speaker scheduling conflict, the legal-drafting seminar has been moved to Friday, November 1, 8:00 a.m. – 12:30 p.m. In addition, consistent with the Center’s public-service mission, we have decided to make the seminar free to everyone. So sign up now. You won’t be sorry.

Three legal-drafting experts will present the four-hour program, which will be highly useful to all attorneys who draft legal documents (rules, wills and trusts, business and real-estate documents, bylaws, and the all the rest).

Learn more about the Opioid Epidemic during Chasing Hope: An Opioid Awareness Program.

Thursday, Oct. 24, 2019, from 6:00-9:00 p.m. at the law school's Auburn Hills campus at 2630 Featherstone Rd., Auburn Hills, Michigan. Food and beverages will be provided. The program is FREE but registration is requested, as seats are limited.

Presented by WMU-Cooley Law School and the law school's Criminal Law and Sports and Entertainment Societies. Sponsored by Newport Academy. 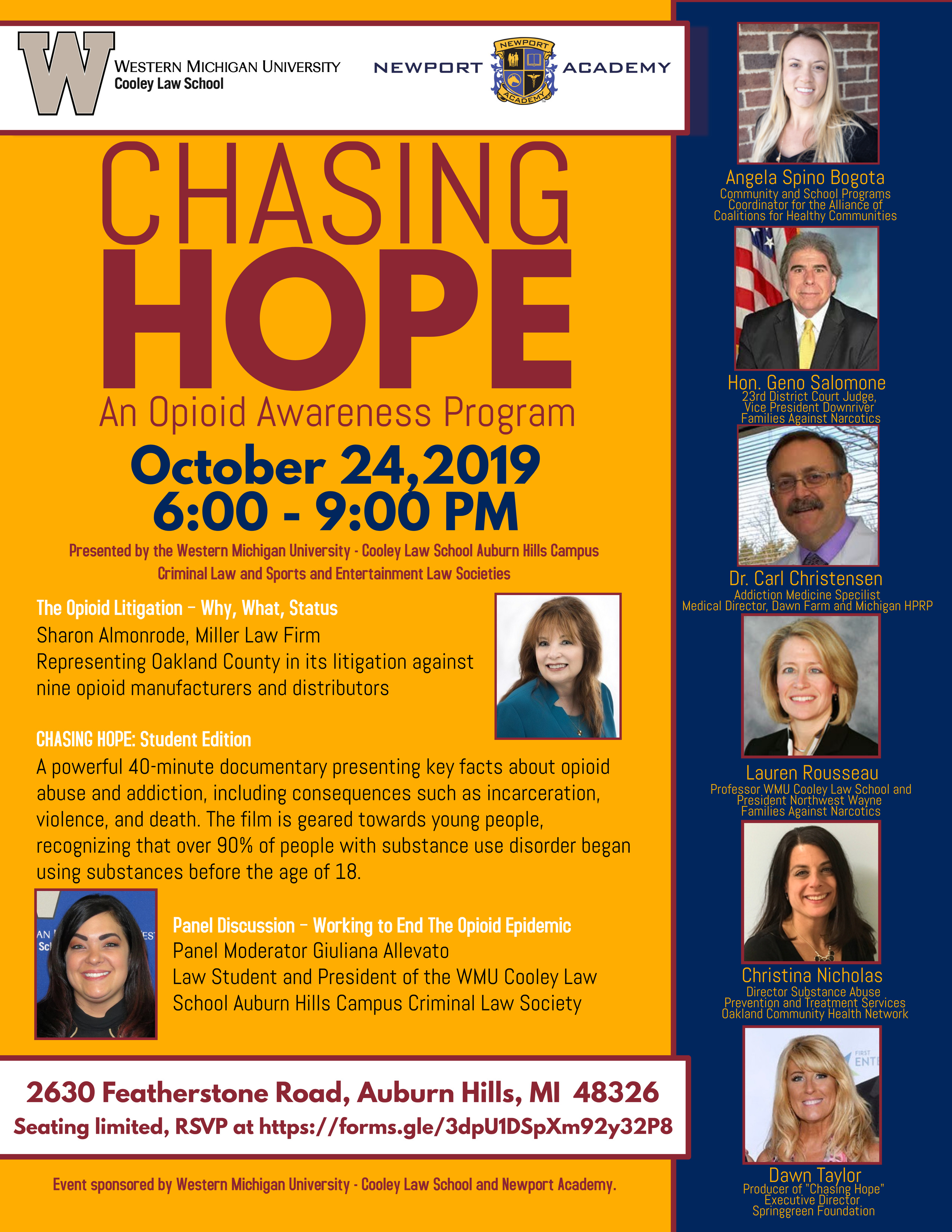 A Discussion on Redistricting & Its Effects on Michigan Voters

The Western Michigan University Cooley Law Review invites you to hear a distinguished panel of legal professionals  and voting strategists explore whether redistricting is protecting or destroying democracy and how it would impact Michigan voters in the 2020 election and beyond. RSVP at [email protected] 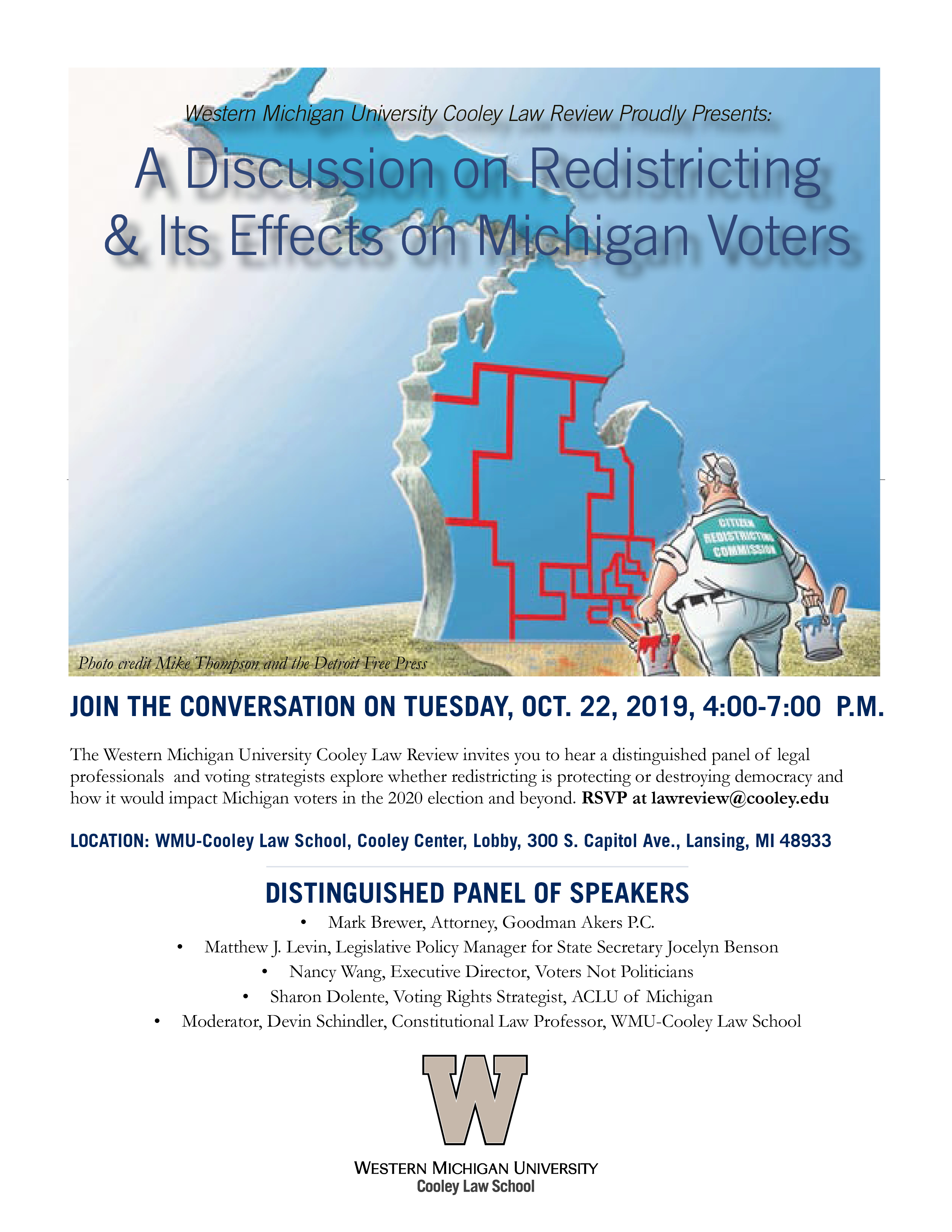 WMU-Cooley Law School Tampa Bay campus chapter of Help Save the Next Girl (HSNG) will host a discussion about the effects of Human Trafficking in the Tampa Bay region. The featured speaker will be Pasco County Sherriff’s Office Corporal Alan Wilkett.

Wilkett, who serves as commander of the Pasco County Human Trafficking Task Force, will talk about the signs, behaviors and indicators of trafficking and how individuals can become involved with efforts to end human trafficking. In addition, he will share information about helping victims and survivors of this crime.

Serving more than 22 years in public service, Wilkett’s career has included positions in Property Crimes, Major Crimes, Cold Case, Narcotics, Child Abuse, Patrol, and Court Security. He has served as a chief deputy, captain, commander, and director of public safety. He has been recognized as the Pasco Sheriff’s Office Law Enforcement Officer of the Year and was presented the Law Enforcement Official of the Year Award during the 2017 Human Trafficking Summit in Orlando.

Registration is free at: SpartanSpin.net. Donations are encouraged and greatly appreciated. All proceeds will go to WMU-Cooley Law School Innocence Project and their important work.

​​The mission of the WMU-Cooley Law School Innocence Project is to provide legal assistance to persons who are imprisoned for crimes they did not commit and to train students in best practices. The Cooley Innocence Project has exonerated four men — Kenneth Wyniemko (2003), Nathaniel Hatchett (2008), Donya Davis (2014), and LeDura Watkins (2017).