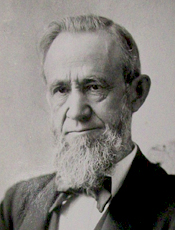 In the 74 years of his life, Michigan Supreme Court Justice Thomas M. Cooley compiled the most distinguished legal record of any man whose name has been associated with the jurisprudence of Michigan.

After a successful career as a city clerk, newspaper editor, and circuit court commissioner, Justice Cooley turned to the practice of law. He was appointed to compile the statutes of the state, a work that he completed in one year. The Compiled Laws of the State of Michigan: Published by Authority. Compiled and Arranged Under an Act of the Legislature, Approved February 2, 1857, KFM4230 1857 .A23, Strosacker Room. When this work was completed, he was appointed the official reporter for the Michigan Supreme Court. Justice Cooley was appointed to the high court in 1864.

Justice Cooley was one of the very first faculty members of the University of Michigan Law School when it opened in 1859. As a professor at the law school, he taught constitutional law, real property, trust, estates, and domestic property. Justice Cooley authored countless articles on legal subjects and wrote several full-length works on constitutional limitations, Blackstone's Commentaries, Story's Commentaries, and Torts. See, Commentaries on the Laws of England: In Four Books / by Sir William Blackstone ... together with a copious analysis of the contents; and notes with reference to English and American decisions and statutes to date which illustrate or change the law of the text; also, a full table of abbreviations, and some considerations regarding the study of law, KD660 .B52 1884, Rare Books.

Justice Cooley's writings are still cited in court opinions, State ex rel. Pope v. Xantus Health Plan of Tennessee, No. M2000-00120-COA-R10-CV (Tenn. Ct. App. May 17, 2000). Legal scholars continue to discuss his interpretations today. Robert F. Williams, Interpreting State Constitutions, 2000 A.B.A. Appellate Judges Seminar.Two of his works, A Treatise on the Constitutional Limitations: Which Rest Upon the Legislative Power of the States of the American Union and The General Principles of Constitutional Law in the United States of America, are included in the Liberty Library of Constitutional Classics.

As a Michigan Supreme Court Justice, Cooley sat on the high court with Justices Campbell, Christiancy, and Graves. Today, these four men are remembered as the "Big Four" of Michigan law for their work in developing the foundation of Michigan jurisprudence. Justice Cooley's reputation soon spread to every state and federal court, and his opinions were widely cited. Justice Cooley wrote many of the opinions for the court including People ex rel. Sutherland v. Governor, 29 Mich. 320 (1874), which remains a benchmark in the separation of powers among the three branches of government.

Retiring from the Supreme Court in 1885, Justice Cooley was soon appointed receiver of the Wabash Railway. Shortly afterward, he was chosen to head the new federal Interstate Commerce Commission.

Small in stature, gentle and scholarly in demeanor, Thomas M. Cooley, in truth, was a giant among his fellows. He enjoyed universal respect and admiration in his lifetime. The judgment of posterity has made that verdict unanimous.